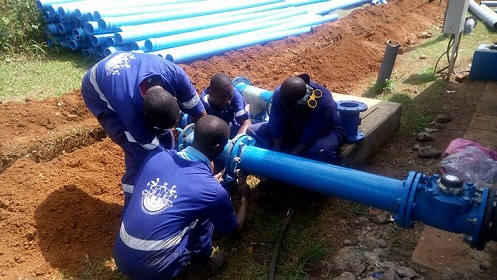 Nabasa was on November 5, 2021 speaking as a panelist on the e-Bomba Ya Business Summit 2021 hosted by Uganda Revenue Authority (URA) when she made these revelations.

The Uganda Law Society (ULS) President brought her point home, highlighting the need to have the public trust the system.

Nabasa says in 1993 NWSC was on the floor of Parliament, defending why the Corporation was not meeting targets.

“Nobody trusted our bills. We were not meeting targets,” she said. “And we realized that one of the reasons we were not hitting targets was that our bill was unreasonable. We look at you and say Solomon is on TV (former NBS TV’s Solomon Serwanjja was the host of the discussion). So, let’s charge him like this. But then in 2007/08, we started saying that let’s review (let everybody have a meter). People didn’t have meters (now we are at 100 metering by the way).”

Now, she added, “what that means is that people still didn’t trust the metering. So, we said let’s come and meter you at your venue. You are the one going to see the points and we are only going to assess if we don’t access your home. When we realized that we were doing this and our bill was really small and they were not prioritizing them, we said let’s make it easy for them to pay through Mobile Money etc. Now, you can pay for water anywhere using anything.”

“A thousand liters of water is at Shs 4, 000,” Nabasa said and explained: “Every time you drink a beer which is about 4, 000, you are drinking a Unit (a thousand litres of water)”

In 2007, Nabasa says NWSC was in 22 towns and “were not doing very well. People didn’t want to pay.” What do we have now? We are in 253 towns. Our collection last month was 100%. Even government has been paying these bills. Because people trust the system.”