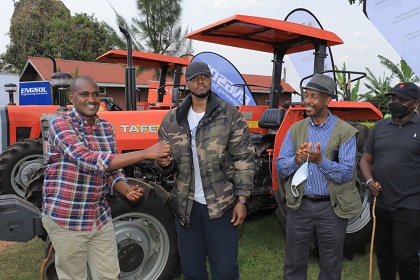 The Minister for Agriculture, Animal Industries and Fisheries Frank Tumwebaze says partnering with established farms is in a bid to indirectly reach out to the small ones.

Tumwebaze’s explanation answers a number of partnerships MAAIF has had in the recent past with large scale farmers with the most recent one being a partnership with Tooro Kingdom.

“The large scale farms with which Government partners are supported to establish large scale centers like agro processing factories. But a single farm cannot supply the inputs required by the factory that it hosts,” Tumwebaze argues.

According to Tumwebaze, an agro processing factory requires more inputs which can be provided by the other farmers in the area thereby providing a sustainable market.

The other farmers, mainly smallholder farmers, benefit from being out growers.

“We are partnering with established farmers to leverage their capacity to indirectly reach the small ones. Small ones need off takers /buyers and quality production guarantors etc,” explains Tumwebaze.

While formally commenting on the partnership with Tooro Kingdom, Tumwebaze said will enroll “this farm on to its partnerships of nucleus farms that help to uplift the other small holder farmers.”

The model farm in Kyenjojo has 9 enterprise demo plots in addition to fish, poultry and cattle.

“When model/commercial farms are supported, they become anchor market support points for the many small ones,” Tumwebaze said.

And with the Parish model framework, Tumwebaze says “nucleus/large scale farmers will help to off take the aggregated production volumes from the parishes.”