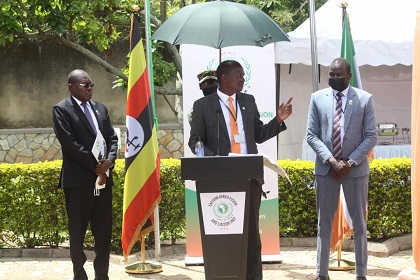 Last evening, the army confirmed elevation of Private Tom Magambo to the rank of Major and his subsequent appointment as the Director for the Criminal Investigations Directorate (CID).

Maj Magambo replaces Akullo who has been at the helm of CID for nearly 10 years.

According to some sources, Magambo holds a Ph.D.

“He is a private with a strong educational background. He is a Ph.D. holder and he had retired from the army. Magambo has been serving as the coordinator of the Eastern Africa Fusion and Liaison Unit (EA-FLU), a regional intelligence-gathering center based in Entebbe,” a senior security source said.

EA-FLU is mandated to support and facilitate regional cooperation initiatives to curb terrorism and other transnational threats posed by organized criminal groups. According to the security sources, the EA- FLU that Magambo has been heading comprises 10 countries including Uganda, Burundi, Ethiopia, Djibouti, Kenya, Rwanda, Somalia, South Sudan, Sudan, and Tanzania.

“Most of our intake are Majors and captains. We have a Lt. Col in Katabazi the Deputy Director-General. Tom Magambo rose to a Director in intelligence. He was Director Analysis,” Rwomushana said.

According to other sources, Magambo has been instrumental in proactive investigations especially during the 2021 general elections, cross-border crime, and the ongoing hunt for groups involved in violent crime including recent terror incidents in Kampala.

“Magambo is not a joke. He’s been instrumental in terror investigations. Many of the suspects who have been in the hands of ISO know him,” a source said. Rwomushana confirmed the claim, saying that Magambo isn’t being introduced to something new.

“He is a trained intelligence officer well over Criminal investigations. Intelligence uses different rankings from the military and military officers serving with intelligence stay long on military rankings since they rarely access training courses,” Rwomushana added.