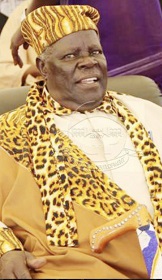 The Teso King died from Mulago Hospital in Kampala, according to Capt. Mike Mukula.

“It’s with deep sorrow that we communicate the demise of our cultural leader PAPA EMORIMOR LO ITESO who has just passed on in mulago national referral hospital, Further communication will be made later . MAY HIS SOUL REST IN ETERNAL PEACE AMEN,” Mukula tweeted.

Teso Kingdom is yet to release an official statement regarding the Emorimor’s death.

This is a developing story