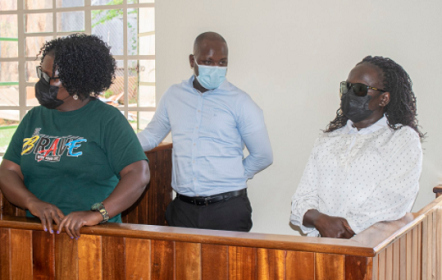 On 27.02.2022, the State House Anti-Corruption Unit (SH-ACU) received a tip off from a whistleblower about theft and storage of government drugs at a private residence of a one Jane Frances Oling in Sekati Zone Mperwerwe parish, Kawempe Division. Upon a directive from the Head of SH-ACU, Brig. Gen Henry Isoke, the unit’s investigative team working with the Kanyanya Police carried out a search at the home. Upon searching the premises, it was discovered that 193 boxes of assorted pharmaceutical drugs worth 21 billion shillings were in illegal possession by the said occupant. During the interrogations, Oling claimed that the drugs were for a Community Based Organization (CBO) registered in Oyam District called Women in Development, where she is the Executive Director. Upon further interrogation. It was established that Ms. Oling has no legal instrument to operate in any other area except Oyam District where her CBO was registered.

“It therefore raised a red flag as to why she was operating in Kawempe but the matter is subject to a probe,” a source at the Unit told this reporter. The investigations also established that the CBO has no legal relationship with Joint Medical Stores (JMS), which purportedly supplied the impounded drugs recovered at the said premises. Ms. Oling revealed that she was receiving these medicines informally through an understanding with two staff of JMS. She didn’t have certified copies on how she gets and distributes the drugs. The Unit working with National Drug Authority (NDA) and a pharmacist from JMS carried out a verification exercise and established that: All the items verified are classified drugs that are not supposed to be found in possession of unqualified persons as in the case of the suspect; Verified items included contraceptives in oral and injectable form and as well as needle-syringe sets and intrauterine devices. “A statement was recorded from the NDA Head of the verification team to this effect,” a source noted. Among the Category, some boxes were Pregnancy Testing Kits marked Government of Uganda –Not for Sale.). It was also established that two cartons of a drug called Misoprostol (an abortion pill) had expired in May and December 2021.

“The suspect in the presence of all the stakeholders acknowledged the findings of the verification exercise,” the source revealed further.

As it stands, the suspect violated The National Drug Policy and Authority Act, section 17 and 27(ii).

Earlier, Oling and two others appeared before Makindye Magistrates Court. The others have been identified as Ivan Luswata (JMS) and Proscovia Onying (JMS). They are all on charges of theft, conspiracy to commit a felony, supplying restricted medicines and storage of restricted medicines contrary to the law.