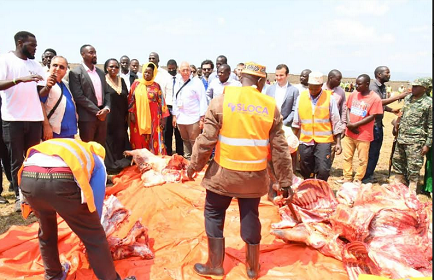 Busoga Kingdom in partnership with four NGOs which included the Association of the Friends of Africa (TADD), Sefer Dernei, IHLAS VAKFI and Safe Love for Orphaned Children Africa (SLOCA) has sacrificed 1400 cows and distributed meat to vulnerable families in the 11 chiefdoms of Busoga.

The 1400 cows donated by the NGOs were sacrificed to mark the celebration of Eid al-Adha at Kyabazinga’s Palace at Igenge Hill in Bugembe, Jinja Northern division in Jinja City. The Kyabazinga hosted guests from all the four NGOs led by the President of TADD Bilgehan Guntekin.

Every year as the Hajj pilgrimage concludes, Muslims arrange for the sacrifice of livestock called Qurbani to mark the celebration of Eid al-Adha. Qurbani is also referred to as Udhiyya in Arabic which means sacrifice and it is an important rite in the Islamic religion.

While meeting with the Kyabazinga in the Igenge Palace, the President of TADD, Bilgehan Guntekin, informed the Kyabazinga that they want to partner with Busoga Kingdom to initiate development programs in various sectors like Education, Health and Vocational skilling.

Guntekin said they have so far drilled more than 300 boreholes in the last six years in Uganda to provide safe drinking water close to schools and Mosques.

Busoga Kingdom’s Prime Minister Owek. Dr. Joseph Muvawala said they were honoured that the delegation came to Busoga and pledged that the Kingdom will work with them to implement their visions.

Muvawala said Busoga is still struggling with the issue of poverty adding that the economic base was affected and therefore requested the NGOs to consider skilling youth through vocational training and creating Jobs after their courses.

The Kyabazinga of Busoga His Majesty William Gabula Nadiope IV thanked the delegation for the different projects and services they are rendering to his subjects in rural Jinja which included distribution of Goats to various homes and requested them to do the same in other areas.

“I have been to Turkey so many times and in terms of entrepreneurship, it is doing well because it has invested money and empowered the young generation and since Turkey is good at Small Medium Enterprises, I do request that we have the same implemented in Busoga and Country at large and this will change a lot of the young generation lives,” Kyabazinga said.

He said that one of Busoga’s problems is his subjects lacking a lot of services especially in the water sector though the government has done its best and therefore requested the NGOs to drill more boreholes in communities to provide safe drinking water as part of their corporate social responsibilities.

Busoga Kingdom’s Minister of Foreign Affairs, Cooperation and NGOs Owek. Machora Joan Kitto appreciated the delegation from the NGOs for the humanitarian heart of donating the livestock to people of Busoga.

Owek. Machora added that she lobbied the NGOs from Turkey to come and support in the development activities of ObwaKyabazinga Bwa Busoga.

Sacrificing cows will take three days and meat will be distributed to vulnerable people in all Chiefdoms of Busoga. The truck that took meat to Bugabula Chiefdom was flagged off by the Kyabazinga of Busoga and SLOCA’s Kibwika Hallil Guntekin.