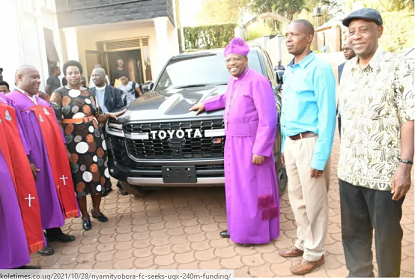 The Diocese of Kigezi Bishop Gaddie Akanjuna yesterday received a new car gift donated by President Yoweri Museveni   to replace the earlier car that was rejected by Christians on grounds that it was small and unable to climb hills.

Rt. Rev. Akanjuna was consecrated as the sixth Bishop of Diocese of Kigezi on June 29,  2022, replacing Eng. George Bagamuhunda who had been Bishop of the Diocese for 8 years but opted for early retirement citing health challenges as the reason for throwing in the towel before clocking 65, which is the official retirement age as stipulated in the church canons.

As it had been the norm, President Museveni sent a Renault Car as his personal gift to the new Bishop, and it was unveiled on the consecration ceremony that was held at Kigezi High School Primary Play Ground.

However, a section of Christians led by Kampala based businessman Edison Besigomwe expressed dissatisfaction with the car gift that was handed over to the Bishop by Former Prime Minister Dr. Ruhakana Rugunda. They argued that the car was too small and unable to climb the hills of Kabale, Rukiga, and Rubanda where the Diocese of Kigezi covers. The protest was largely held on social media especially whatsaap where a number of political leaders joined the demand for a better car from Museveni.

Despite Akanjuna accepting the Renault car on his concecration day, he did not drive it and instead he used an older car that belonged to the Diocese until today.  While speaking at a thanks giving ceremony of Nyaruhanga Highschool in Rubanda District, on 4th June 2022, the state minister of finance (general duties) Henry Musasizi revealed that President Museveni had received reports that the Renault car gift for Akanjuna was rejected, and the plan was to buy a new befitiing car for the Bishop.

Barekye explained that President Museveni had not settled down from the day he learnt that his car gift to the Bishop had been rejected, adding that Museveni had since ordered for a new car from Germany since the Toyota Land Cruiser GR-Spot was not available anywhere in Uganda. She also revealed that the rejected car would be returned to the State House and given to someone else.

Amidst songs of joy and thanks giving, Bishop Akanjuna thanked President Museveni for the generosity and support extended to the Diocese in the recent years. Akanjuna said he would use the car to move up and down the hills and valleys in the diocese, spreading the gospel alongside other activities like pastoral work.

The head of laity in the Diocese of Kigezi Canon Baryantuma Munono said they were extremely happy that the president had listened to concerns of the Christians about the terrain of Kigezi that required a stronger car for the Bishop.

Meanwhile, Mr. Edison Besigomwe who spearheaded the protest against the first car, said he was thankful to God that their concerns had been addressed by President Museveni. He also appreciated efforts of all Christians who kept demanding for a befitting car for the Bishop.

The function to handover keys for the new car, was witnessed  by the Kabale District RDC Godfrey Nyakahuma, Central Division LC.3 Chairperson Sam Arinaitwe, LC.5 Vice Chairperson Miria Akankwasa, Emeritus Bishop Enock Kayeye, all archdeacons and clergy from the Diocese of Kigezi among others.