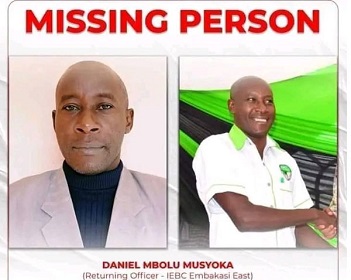 The missing Embaksai East returning officer has been found dead.

Daniel Mbolu Musyoka went missing on August 11. He was at the East African School of Aviation tallying centre when he disappeared at 9: 45 am.

A missing report had been made to police. His body was found in a thicket on Monday in Mariko area and taken to a local morgue.

Police who visited the scene said he seemed to have been tortured to death.

The family of the deceased and police from Embakasi visited the mortuary and identified the body. The killers and motive are yet to be established.

The footage was under scrutiny by cyber crime unit and police insisted that Musyoka was safe even though his whereabouts remained a puzzle.

When he made the announcement, IEBC chair Wafula Chebukati said they had tried to reach him but to no avail.

“Musyokas family and the Commission have been trying to reach him without success. A report of a missing person has been made at Embakasi police station,” Chebukati said on Monday.

He added many other commission staff had been harassed and intimidated.

The deceased’s wife Tabitha Mbolu and daughter Prudence Mbolu had the last phone conversation with him before he went missing.

Prudence revealed to journalists that her father’s colleagues at IEBC called him after they failed to reach the missing officer on phone.

The police on their side said they had been looking for him in vain. Different teams had been dispatched to comb through the city and pursue different leads in a bid to trace the missing officer who had not slept for three days after the vote tallying process began.

The officers obtained CCTV footage showing final moments of Musyoka. The footage is under scrutiny by cyber crime unit

A senior officer said all candidates in the just concluded polls are persons of interest in the case.

They want to check the conversations the RO had with any of the candidates or their agents before the elections.

“Who did he talk to before and after the polls? Why, what kind of conversation did they have,” said an officer who asked not to be named.

Police said there have been claims made on various parties and they are tying to confirm that.

The claims include those that he may have been taken out by parties that were not happy with the way he handled the polls yet he had made an earlier deal.

Former IEBC Commissioner Roselyn Akombe sent a message of solidarity to the family of the deceased.

Akombe tweeted on Saturday morning that she was “praying that Daniel Musyoka is safe and is reunited with his family.”

She said she was aware of the struggles her former staff and colleagues were facing during the tallying of presidential elections.

“Keeping my former staff and colleagues in my thoughts and prayers during these tough times. I know what you are going through. Bon courage,” she said.

Akombe fled to New York and resigned in the run-up to the 2017 Presidential Repeat election, saying she felt unsafe, and that had no capacity to hold a credible election.

The former Commissioner last month took to her Twitter handle to commemorate her late colleague Chris Musando, who was murdered five days to the election.

Later his body was found in a thicket in Kikuyu, alongside the remains of a female companion who was identified as Carol Ngumbu.

“Five years since you were handed to the brutal killers to thwart efforts of delivering a credible election in Kenya. Though your betrayers have been rewarded and electoral integrity remains in peril, justice will be served, no matter how long it takes,” said Akombe.