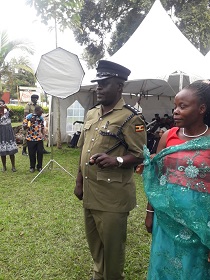 A senior officer of the Uganda Police Forces has collapsed to death while in the toilet.

A well-placed source says that Assistant Superintendent of Police (ASP) Enock Tumwesigye Apuuli the Community Liaisons Officer – Fort Portal city was at work when nature called. It was then that he took to the toilet.

However, while there, he collapsed and died at 12noon this afternoon.

Fort Portal District Police Commander has confirmed the death in a message to police officers.

Our source says that the body is at Buhinga hospital in Fort Portal and is expected to be transported to Mulago for postmortem examination.