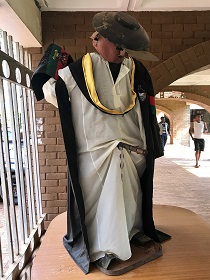 In 1976, Gen. Elly Tumwine would participate in the historical strike following the killing of a student, Paul Sserwanga. He was brutally murdered by suspected Idd Amin State Research Bureau operatives. The then Guild President, Olara Otunnu organized a protest march in Kampala.

Gen. Tumwine played a crucial role in that protest. He and others printed the placards for the protest. Tumwine joined a protest called by Lumumba hall chairperson, Kagata Namiti for a march to the City Square up to Kibuli where Paul Sserwanga was buried. That day turned out to be the infamous “Black Tuesday in Makerere University’s history.

Tumwine narrowly escaped arrest by hiding in the wardrobe as soldiers broke into halls of residences targeting students that had participated in the strike. He joined the likes of Dr. Kiiza Besigye, Henry Tumukunde, and David Tinyefunza aka David Sejjusa.

Shortly after the official opening of Lumumba Hall in 1971, the Uganda Army soldiers raided Mary Stuart, or Box, the female hall of residence next to Lumumba. Students of Lumumba engaged the soldiers in a fight during which one of the male students named Gongom died. From this point on, a Lumumba-Box or Lumbox solidarity was born. A monument was erected in his honor. The Gongom monument is addressed as His Majesty, Highness, and dressed in a graduation gown.

This attire inspires students to read and work hard but is also a symbol of unity. During the invasion, the soldiers destroyed “Gongom”. “We discovered that gongom had been destroyed, and this time we made a big sculpture together with Kibira who was good in metal welding. So we said let’s give gongom a real height, give him a long penis, to show that he is in charge of this place,” narrated Tumwine.

Adding that, “After some time, we said gongom can’t be alone, then we went and sculptured gongomes.”  In 1978, Elly Tumwine abandoned his teaching job to join the FRONASA forces led by Yoweri Museveni. “When I joined the armed forces, I did everything from cooing to carrying luggage. Because the president had taught me in P7 and when I heard that he was the one leading the group, and we were tired of Iddi Amin, I joined him,” he said.

In 1981, when Museveni went to the bush to form the National Resistance Army (NRA), Tumwine went with him. He is reported to have fired the first shot in the Luwero triangle war. He has served as Army commander, Minister of State for Defence, Minister of Security, Director General of the External Security Organization (ESO), and Army MP among others.

Important notes: Gen. Tumwine from Makerere University in 1977, with the degree of Bachelor of Arts in Fine Art together with the Diploma in Education; abbreviated:BA (FA)/Dip. Ed. He specialised in the history of art painting. He died of lung cancer yesterday in Nairobi.

Story adopted from the Independent.