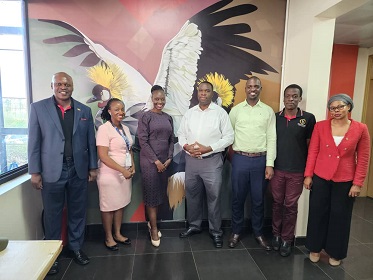 Our sources revealed that the two had discussions around partnerships and going electric on staff and ramp Kayoola buses.

Kayoola buses are a product of Kiira Motors Limited, a Ugandan company that is jointly owned by the Ugandan Government and Makerere University.

Known for its development of electric vehicles (EV) that use solar energy, the company has developed different models the most common being the Kayoola EV Bus, the EV Kiira and Kiira EV SMACK.

Use of Kiira Motors Electric Cars is expected to increase with the company being in talks with various government agencies to use the buses for transportation of their staff among them being Uganda Airlines.

Having started commercial operations in August 2019, Uganda Airlines has expanded its network to 11 destinations since its inception.

Earlier this year, Jennifer Bamuturaki, the Ag. CEO (then) at Uganda Airlines, said the key focus areas for the national carrier in 2022 include “investing in customer retention systems, seeking strategic partnerships, growing our cargo operations and network expansion.”

According to the airline’s business plan, in the 2nd year of operation, the national carrier had planned to have 18 and four (4) regional and international routes respectively, but this couldn’t be possible due to COVID-19 effects.

Bujumbura, Juba and Mogadishu routes are the best performing, with a load factor of 70%.

“Juba and Mogadishu are on a budget while Bujumbura is slightly below the budget,” Bamuturaki said in January 2022, adding that with the full reopening of economies globally, the airline will post positive performance on most of the routes.