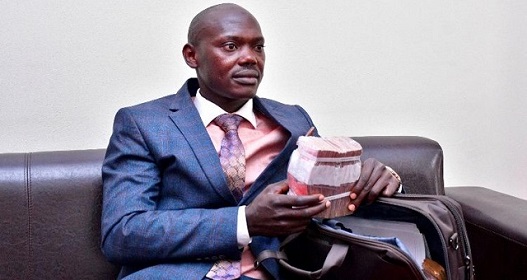 The 11th Parliament of Uganda has blocked a potential party disciplinary action against Bukoto South Member of Parliament, Twaha Kagabo.

Recently, the lawmaker in what looked a public show paraded Shs 40 million cash to the Leader of Opposition in Parliament claiming that it was a bribe from the Speaker of Parliament.

Speaker Anita Among denied the allegation and instead ordered a probe on Kagabo.

The report on Kagabo’s conduct was tabled on the floor of Parliament Tuesday by the Rules, Privileges, and Discipline Committee and adopted.

During the presentation of the report, Kagabo asked for forgiveness and was pardoned after regretting his actions before the Committee. Deputy Speaker of Parliament, Thomas Tayebwa blocked further debate on the matter, warning other lawmakers to take Kagabo’s case as lesson to learn from.

However, the acting LoP, Muwanga Kivumbi, says that the party will act on Kagabo.

Kivumbi says the National Unity Platform (NUP), to which Kagabo belongs, has standards for its members and that matter would be further picked up by his party and subject to the disciplinary procedure.

But Abdu Katuntu, the Rules Committee Chairperson raised a procedural matter saying that rule 175 (3) of the Parliament rules of procedure prohibits any response to findings and recommendations to Parliament in a case where the affected parties have agreed.

Katuntu said that any actions taken by the party should not be part of the report.